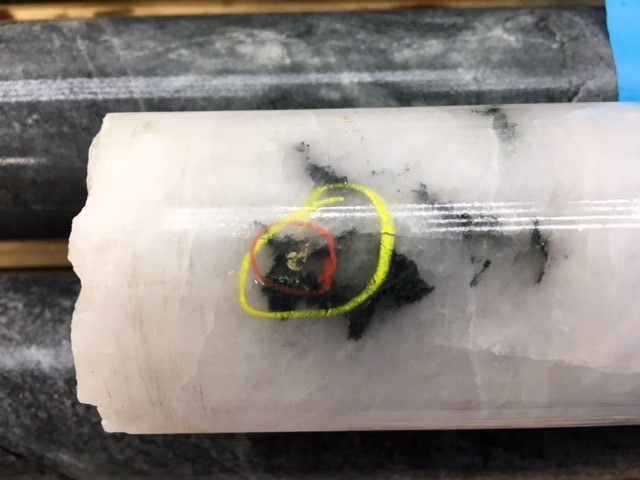 Montreal, Québec, Canada, June 22, 2021 – MONARCH MINING CORPORATION (“Monarch” or the “Corporation”) (TSX: GBAR) (OTCQX: GBARF) is pleased to announce the final results for its 2020 exploration diamond drilling program on its wholly-owned McKenzie Break project, located 25 kilometres north of Val-d’Or, Québec. The results include several significant intersections as Monarch continues to extend the high-grade portion of the recently estimated resource towards the northeast and south.

Diamond drilling was carried out in 50‒100-metre step-out holes, with 14 holes drilled (6,697.4 metres). All assay results are now available for the remaining 8 holes of the second half of the program (4,097.4 metres). The most recent results for the resource expansion drilling program include hole MK-20-276, drilled at the southern limit of the mineralized envelope, which intersected 70.80 g/t Au over 0.4 metres and 10.2 g/t Au over 1.2 metres. The hole is approximately 113 metres from hole MK-20-255, which intersected 13.95 g/t Au over 14.35 m (see press release dated July 23, 2020), and has extended the mineralized envelope approximately 50 metres to the south.

Figure 3: Expansion of mineralized envelope to the S.

Figure 4: Expansion of mineralized envelope to the NE.

Monarch started drilling the 14,300 metres of Phase 2 of its drilling program with one drill rig in April and plans to add a second drill rig in June. The program is designed to further expand and delineate the mineralization. The first hole, MK-21-268, located 50 metres east of the resource envelope, is now complete. Visual examination has identified visible gold in two areas in the hole, both associated with quartz-tourmaline veins with pyrite over 1.7 metres, hosted in an altered diorite. Assay results are pending.

“We are very pleased with the results of drilling program in that we have been able to expand the mineralized envelope beyond the limits of the previous mineral resource estimate,” said Jean-Marc Lacoste, President and Chief Executive Officer of Monarch. “The most recent drill results to the northeast and south, beyond the boundaries of the resource estimate, demonstrate that the mineralized envelope is still open and lies at a relatively shallow depth. We are continuing to follow and expand this high-grade portion of the resource by diamond drilling, and will also be testing similar features elsewhere on the newly-expanded property.”

Monarch has conducted a high-resolution detailed airborne magnetic survey on a 25-metre line spacing over much of the northern and southern parts of the property, including the new claims staked in March 2021. Final maps are pending. The magnetic survey will help in defining the geology and identifying magnetic signatures typical of the current mineralized zones.

Gold mineralization occurs in an elongated diorite unit or lens within a shallow embayment of the Pascalis Batholith. Monarch continues to have drilling success beyond the limits of the recent resource update provided by Geologica and GoldMinds (see Table 3 and press release dated February 8, 2021). The mineralized envelope currently measures 800 metres by 650 metres and has been tested down to a vertical depth of 400 metres. The Corporation will continue drill testing the limits of the defined mineralized envelope as well as other priority targets on the property, including targets on the newly-staked claims to the south (see press release dated March 8, 2021), with its 14,300-metre Phase 2 drilling program. Drilling resumed in April and will accelerate with the addition of a second drill in June.

Sampling consists of sawing the NQ-size core into equal halves along its main axis and shipping one of the halves to AGAT Laboratories in Mississauga, Ontario, for assaying. The samples are crushed, pulverized and assayed by fire assay, with atomic absorption finish. Results exceeding 3.0 g/t Au are re-assayed using the gravity method, and samples containing visible gold grains are assayed using the metallic screen method. Monarch uses a comprehensive QA/QC protocol, including the insertion of standards and blanks.

The technical and scientific content of this press release has been reviewed and approved by Louis Martin, P.Geo., the Corporation’s qualified person under National Instrument 43-101.
‍

5 Numbers may not add due to rounding.