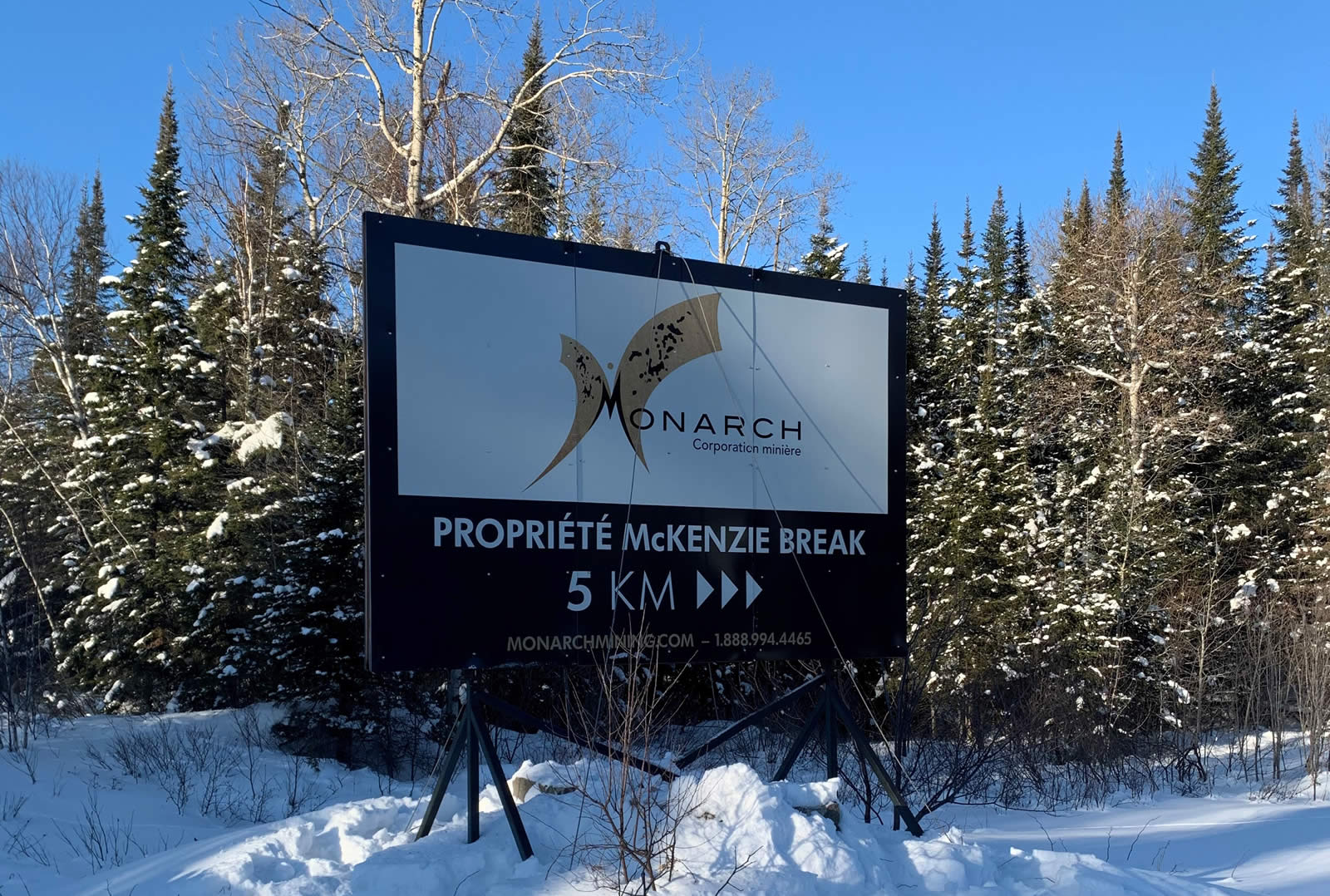 Monarch acquired the McKenzie Break property from Agnico Eagle Mines Limited in 2017 and expanded the property in 2020 through additional purchase agreements with local prospectors and map staking to now stand at 133 claims covering a total area of ​​5,130.4 hectares. Located 20 kilometres north of the Beacon mill and 10 kilometres south of the municipality of Barraute, Québec, the property is accessible year-round via Route 397 and a gravel road and includes a portal and 700-metre ramp excavated in 2009.

Geologically, the property straddles the Manneville Tectonic Zone, interpreted to be the eastern extension of the Destor-Porcupine Break. Gold mineralization occurs in an elongated diorite unit or lens within a shallow embayment of the Pascalis Batholith.

Monarch mandated Geologica Groupe-Conseil Inc. of Val-d’Or and GoldMinds Geoservices of Québec to prepare and update the July 12, 2018, NI 43-101 Technical Evaluation Report and Resource Estimate prepared by Geologica and GeoPointCom. The 2021 updated resource estimate was calculated to present resources with both constrained pit and underground potential. The current resource estimate for Monarch indicates that:

The estimate is based on a database of 333 drill holes, 57,789 metres of drilling and 34,026 assays. A total of 30 mineralized envelopes were modelled and validated. Capping was applied to raw assays before compositing, with grades capped at 60 g/t Au for the mineralized zones. The independent and qualified persons for the mineral resource estimate, as defined by NI 43101, are Merouane Rachidi, P.Geo., and Claude Duplessis, Eng., of GoldMinds Geoservices.

Table 1 presents the combined resources (in-pit and underground) by category for the McKenzie Break deposit at the selected cut-off grades.

This updated mineral resource results in 44% more gold in the Indicated category and 291% more gold in the Inferred category compared to the 2018 resource estimate (Geologica, 2018). The resource in the area of the proposed pit shell was expanded due to increase drilling below and at the outer edges the proposed pit shell. The underground resource increased significantly due to the new zones discovered at depth and exploration drilling completed at 50-m centres in an attempt to define the limits on the mineralized zone.

The mineralized envelope has yet to be closed off and Monarch continues to drill it off at 50-m centres. Monarch has planned a 38-hole, 14,500 metre follow-up drilling program to continue to expand the limits of the known mineralization. This follow-up drilling is in progress, with results pending.

“We are very pleased with the updated resource estimate,” said Jean-Marc Lacoste, President and Chief Executive Officer of Monarch. “Our 2018-2020 drilling programs have allowed us to significantly expand the known mineralized envelope, which lies at a relatively shallow depth. These programs totalling 20,037.9 metres of drilling managed to add 44,401 ounces of indicated material and 186,566 ounces of inferred material, which translate to an additional 2.2 ounces of indicated resource and 9.3 ounces of inferred resource for every metre we drilled. We believe that McKenzie Break continues to hold significant exploration potential, as shown by these latest results, and we intend to develop that potential through efficient drilling programs.”

The resource estimate was prepared by Merouane Rachidi, P.Geo., Ph.D., and Claude Duplessis, P.Eng., of GoldMinds Geoservices Inc., both qualified persons in accordance with National Instrument 43-101 standards. The technical and scientific content of this press release has been reviewed and approved by Louis Martin, P.Geo., the Corporation’s qualified person under National Instrument 43-101.